I didn't think I had anything suitable for the CAS Christmas 'Twelve Days of Christmas Challenge' and then I remembered I had a die that had been a cover gift with a magazine ages ago.  So here is my card! 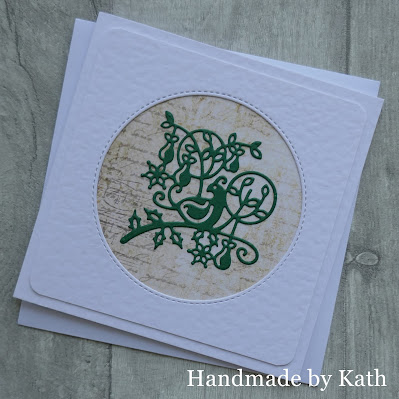 Just love your patridge in a pear tree diecut, Kath!! So pretty in the window with the script behind!!

Very elegant. I like the die cut in the dark green against the white card and the script paper behind it.hope your magazine to be safe and well. Hugs Mrs A.

This partridge in a pear tree die looks great Kath and shown off beautifully in the round aperture with the script paper behind it. x

Love your Christmas card Kath and what a lovely die

Your card and die are lovely!

I have all my cover gifts stored in a box of their own .. .. I love getting it out and having a delve through. It is easy to forget what is in there!

Hope you are having a good week.

Lovely card Kath! I love the script behind that awesome partridge in a pear tree die! The circular white framing is just perfect. Thanks for sharing with us at CAS Christmas!

Good thing you remembered this magazine cover gift. The script background is a great backdrop for your die cut partridge. A beautiful card. Thank you for joining us at CAS Christmas.

What a gorgeous die. I'm glad you remembered about and could make this lovely card. Thank you for joining in the No Stamp or Digi Challenge at CHNC this week.

Absolutely gorgeous Kath - I do love the die you used, so perfectly. I hope the floods have subsided - we still have rain here. Dudley is in the back garden building a dog and hedgie sized Ark! Sigh - so we'll be in the canoe then I guess.

so lucky to get that die free, it's perfect for the challenge and makes a beautiful CAS card. thanks for joining us at CAS Christmas. 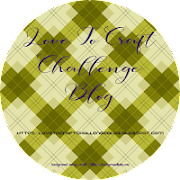 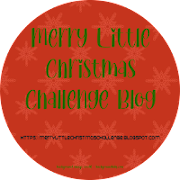