The June Hope and Chance Charity Kit is being sold to support the British Hedgehog Preservation Society.  I'm so glad I bought it as soon as it was released as it's now sold out.

The kit has everything to make the card other than adhesive, gems and coloured pencils.  I only attached one of the matt layers as I wanted to see more of the cream card around the edge (I've used the second matt layer to make some gift tags!).  I attached the check blind behind the window die cut and attached it to the card.  The window box was 3D but Christine suggested cutting the edges and laying it flat if the card is to be posted.  I did this, but found it looked too flat so I added thin strips of foam tape behind the balcony before attaching it to the window.  This gives a little dimension to the card but should also survive the postal system.  The leaves were coloured with two shades of green coloured pencils and were highlighted with a Wink of Stella.  After attaching the ivy to the balcony I added the flowers and small gems to the centres. 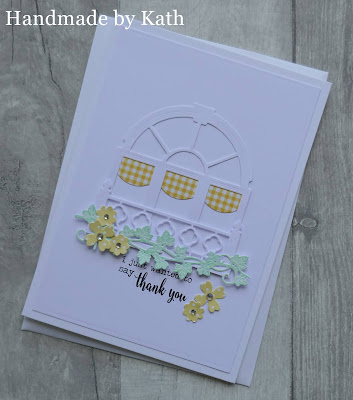 In hindsight I should have attached the window a little higher as the ivy covers part of the sentiment, but once it was stuck it was there to stay!

I love these card kits and can't wait to see what Christine will design for July.

gorgeous card Kath the colours are beautiful against the white

This is gorgeous love it

A very pretty card Kath, and to help hedgehogs too which is even better. I think when it is standing and you are looking up at it a bit you will see the sentiment perfectly well. x

A wonderful card design, Kath. Love the colours. A great cause too. Hope you are keeping well. Big hugs, Carol S.xxxx

This is beautiful Kath, so pretty and for a good cause.
Pauline - Crafting with Cotnob
x