Happy Birthday to my Husband

It's Steve's birthday today and as he liked the sailing boat card I recently made I made a similar card for his birthday.  This card uses the striped boat instead of the spotty one.

I covered the front of the card blank with blue paper leaving a border around the edge.  I die cut the waves from both blue textured card and white matt card, layering the blue onto the white to create the white tops of the waves. Thankfully I had got my MISTI to stamp the sentiment onto the wave as it was three separate stamps and they took a bit of fiddling around to get them lined up.  I stamped them several times to get a good depth of colour as I was stamping onto textured card - even so, there were some stamped bits missing on 'husband' so I filled them in with a black pen!  These strips were trimmed and attached to the card - the top layer was only attached along the bottom so I could slip the boat between the waves.  I stamped and embossed the boat before using the coordinating die to cut it.  After colouring the boat with Promarkers I attached it to the card with a foam pad behind the sails.  I die cut three clouds,  the largest and smallest were attached to the card with glue and the medium cloud attached with a foam pad. 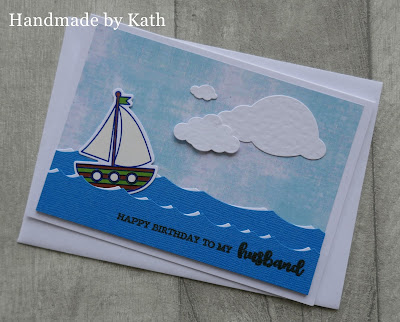 I am entering the following challenges:
Pearly Sparkles Challenge - For the Boys/Men
Seize the Birthday - All About Summer

Many happy returns to Steve, hope he has a great day, a fabulous scene Kath, love the boat onthe waves and your sentiment, thank goodness for stamping platforms.

Happy Birthday to your Hubby Kath....I'm sure he loved his nautical card

This is a great card for your hubby Kath and a pretty scene and am loving the stripy sailboat. x

Happy Birthday to your Hubby Kath, I love this gorgeous card.

A super card Kath, such a fabulous scene, I'm sure your husband loved it - I hope he enjoyed his birthday.
Pauline - Crafting with Cotnob
x

Love your card, Kath! I love that its not just the color but also texture that separates the sea, th sky and the clouds! Its such a clean and simple but wonderful card, I can see why it would appeal to your husband! Thank you so much for joining us at the Seize the Birthday challenge!
I hope your husband had a wonderful birthday!