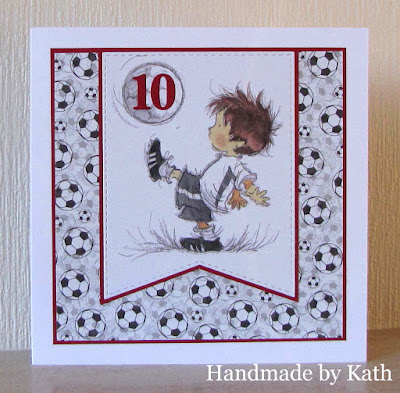 I trimmed the football paper, layered it onto dark red card and attached it to the centre of the card front.  I die cut the pre-coloured Art Pad image ensuring there was an equal amount of white space around the footballer.  As I had used the largest die for the image and I wanted a red matt layer I drew around the edge of the die before trimming it it to shape.  I attached the footballer and trimmed the top of the matt layer so it would fit against the top of the paper.  This was then attached to the card.  I die cut the numbers and attached them with Collall glue so I had some 'wriggle time' to get them in the right place on the football.

Hope you have had a nice weekend. Sue

A fantastic card Kath, I love the die that you've used.

Super card Kath and I like the football paper. Great minds think alike! hugs Mrs A.

I love this sweet little footballer Kath and the papers go beautifully and a great idea to put the age on the football. A wonderful card for a young lad. x

Super card Kath and perfect for a football fan xx

Happy Birthday to your nephew, Kath! He will love this design with all the footballs and his own birthday number!! Hugs, Darnell

Such a sweet creation for your Nephew Kath, many thanks for sharing your new crafty dies (which look very useful as I can never cut banner straight) with us at Allsorts challenge.

Fab card for a footballing boy - love the coordinating background paper! Thanks for playing along at Seize The Birthday :)

Ooh this is a great card for a young lad....the die is a brilliant way to show this adorable image

Fabulous card, Kath, I love the design and the '10' in the ball is just perfect. xx

Thanks for entering our challenge at allsorts Tracy x

Love the card, so darn cute and your new fishtail banners worked perfectly for this card. So glad you joined us at Die Cut Divas.

Brilliant card Kath! Perfect for a little football fan and in your lovely fresh and clean style too. Love the fishtail banner die you used and the image and BP are perfect together!

I just spotted that you won over at Allsorts so hopped over to say 'well done'!

Beautiful card. Thanks for joining us at die cut diva's.
Dawn DT