I used another pre-coloured Lili of the Valley topper for this card for a young boy's birthday.  I'm entering it into The Male Room 'Babies and Little Boys' and Little Claire Designs 'Just Add Bunting' Challenges.  I've used more snippets so I'm also in the playground at Pixie's Crafty Workshop. 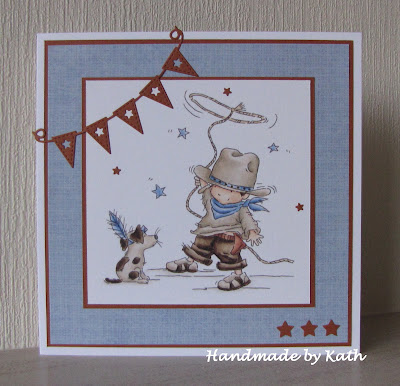 Oh Kath - this is one of my favourite LOTV images, such a patient pooch :) Beautiful card and the bunting is such a lovely touch to pull it all together.

Sad about LOTV - out of interest I hopped to their online shop today and now they're down to only stamps and cross stitch kits and patterns :( Not a sheet of paper or a single pre-coloured image to be seen :(

What a cute card Kath.

A great male card Kath, I love that bunting and what a sweet image. Barbxx

wonderful card, I love the image and colouring.

Fab card , cute image and I love the bunting

Adorable topper and such a cute card for a boy!

As always a lovely card Kath.

Hope you have a good weekend.

Great card Kath what little boy could fail to love it.

A fabulous card Kath, such a lovely topper and your bunting is perfect.
Pauline
x

hi Kath, such a sweet card and the bunting is the perfect addition.

Wrangle those little doggies!! Love it! Thanks for joining us at The Male Room!

This is adorable, love the image and the bunting is fab. Great colours too. Thanks for playing at lc x

A really sweet card and that image is wonderful. Thanks so much for playing along with our Babies & Little Boys theme at The Male Room! Deborah, DT.