This die was a cover gift on a magazine before Christmas, but I didn't have time to use it for last year's cards.  I've made this quick card using snippets, so I'm off to the playground at Pixie's Crafty Workshop and I'm also entering the ABC Christmas Challenge 'A is for Anything Goes'. 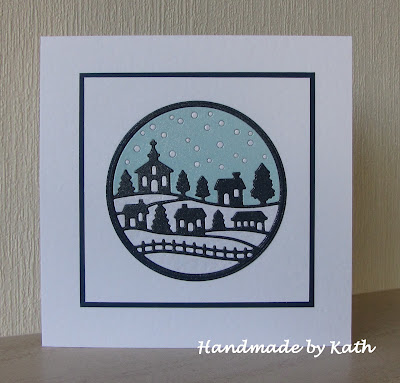 I die cut the Festive Scene from dark blue, pale blue and white hammer card.  The dark blue die cut was attached to a slightly larger circle which had been die cut from dark blue card.  I then attached the pale blue and white pieces to the scene.  Having read tips on other blogs, I die cut the white scene last and left the pieces in the die until I was ready to use them so I could see where all the small pieces fitted.  Once all the pieces were in place, I sprayed the whole image with the Spray & Sparkle.  When this had dried, I layered the image onto white and blue card before attaching it to the card front.

This is a beautiful card Kath. I think Spray and Sparkle really adds to this type of design. It was interesting reading how you did it. Isn't it great the way we pick up tips from each other along the way. Barbxx

So beautiful Kath !
Is this number 10 ?
Ineke X

Great winter scene creation! Love the addition of sparkle and thanks for sharing the tips!

What a lovely festive make . . . and a great cover gift too!

Now, Snippets Playground playmate Eve has started a game of TAG . . . so I'm running after you to TAG you and make YOU "It" now . . . off you go and tag another playmate!

That's lovely Kath....I have a similar die that I've not used yet so thanks for the inspiration!
hugs Jo x

Such a beautiful Christmas winter scene.
Thanks for joining our challenge at ABC Christmas Challenge,hope to se you again.
Dorte x

This is gorgeous, Kath, what a great die that is!

Oh Kath, this really is lovely! I only discovered Die Cutting Essentials magazine recently and have yet to try out this die - you used it perfectly! Allowing the die cut scene to take centre stage is a perfect way to use such a delightful die. Tee, hee - I learned the tip about leaving intricate pieces still in the die ready to pick out one by one and place where they need to go the hard way :)

Now to see if I can mess my sidebar up by adding your Blog Candy!

Wonderful christmas card Kath. Fabulous die and perfect design... well worth the time taken to put all those timy pieces in place xx

Oh, this die is great and I think it's perfect for a CAS Christmas card you made. Fantastic work!!!
Hugs! xx

I was only looking at that cover gift today as I had to have it when I saw someone use it, needless to say, I haven't yet used it! Your card is absolutely brilliant, and yes I must use the set if I could achieve something like this.