Last week I was very lucky to win some stencils on the Funky Fossils Facebook Group.  I had three stencils of my choice and Sara also enclosed a lovely birthday stencil too.  I don't often use stencils, probably because I only have a couple of small flimsy ones, but think I'll be using them a lot more now I have these new ones.

I kept this card simple as I wanted to show the lovely Zen Mandala stencil.  I used pink pearlescent ink to stencil the design onto a piece of white card, trimmed the edges, rounded the corners and attached it to the card front.  I die cut the sentiment twice from dark purple card, layered the two die cuts and attached them across the centre of the mandala. 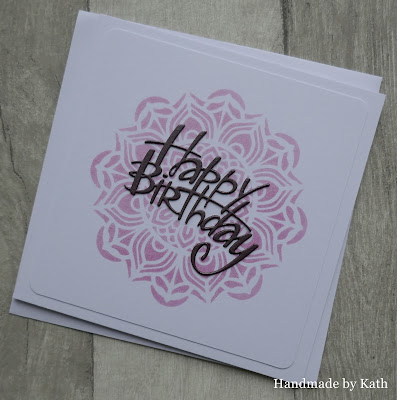 Thanks for playing along with us at MAWTT,

I have three FF stencils too and they are really lovely designs and stencils are so good now that they have become much more popular. This mandala is beautiful as the main image and love the large die cut sentiment over the top Kath and the pearlescent pink is very pretty. x

A lovely CAS design. Thanks for sharing with us at Allsorts challenge.

A lovely delicate looking CAS card Kath, many thanks for sharing with us at Allsorts challenge.

Congrats on your win, Kath, and well done getting right down to using one of your new stencils! I love Sarah's stencils and love this mandala done up in pearlescent pink with the dark purple sediment! Good choice of sediment die because the font doesn't block any of the pretty mandala! Thank you for sharing with everyone at NBUS! Keep safe and take care! Hugs, Darnell

Hello… Thanks for sharing your lovely mandala card with Moving Along with the Times; it fits perfectly with our ‘New’ challenge theme. Hope you can join us next month for our new challenge. Diane Louise (Team Leader) xx

Such a gorgeous CAS card! Really lovely use of the stencil. Thanks so much for playing at AAA Birthday!

So beautiful! Thanks for playing at AAA Birthday, hope to see you join in with future challenges. Stay safe and keep crafting!

Really a perfect CAS card.♥ Thanks a lot for joining us at our Stencil Background Challenge by
AAA Birthday Challenge
Good luck and hope to see you again.
Hugs and greetings Angela DT