I realised that I haven't joined in the current Snippets Challenge so found some time this afternoon to make a quick Christmas card.

I die cut the Winter Wonderland scene from white hammer card and attached it to a snippet of blue paper which I thought looked like a wintery sky.  I die cut a frame from gold pearlescent card as I wanted to inlay the scene, but then found the scene was slightly too big to inlay into the frame.  Rather than try and trim a smidgen from the edges I used the stitched die to cut it to the same size as my frame.  The frame and scene were then attached to the card.  To finish I used gold card to die cut one of the stars from the scene and attached it above the deer. 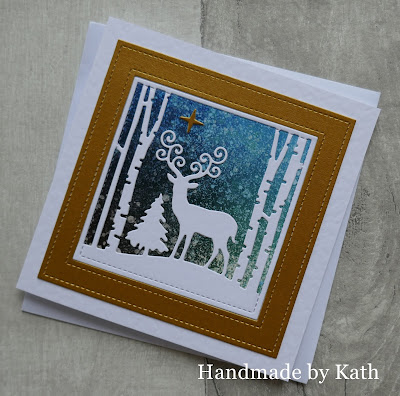 What an adorable scene and wonderful card. I love it!
Valerija xx

LOVE the look of this wintry card Kath.

A beautiful seasonal card using these dies together with the pretty background paper and gold stitched frame and sweet little star too...perfect! x

The card shows the peace and quiet of winter, Kath. I glad you shared over at CCAYR. Thanks so much for playing at CCAYR. Martina - DT

One of my favourite dies Kath - such a wonderful scene. Great card!

Beautiful card!!! Thank-you so much for participating in our CHRISTMAS CRAFTS ALL YEAR ‘ROUND challenge. Hope to see your beautiful creations in our next challenge!! Have a happy crafty day!!!
Deanne at A Little Bit O’ Paper

Wonderful Christmas scene you have made, love the gold and blue combo.
Thank you for joining in the S and T challenge at ABC Christmas Challenge.
Dorte x